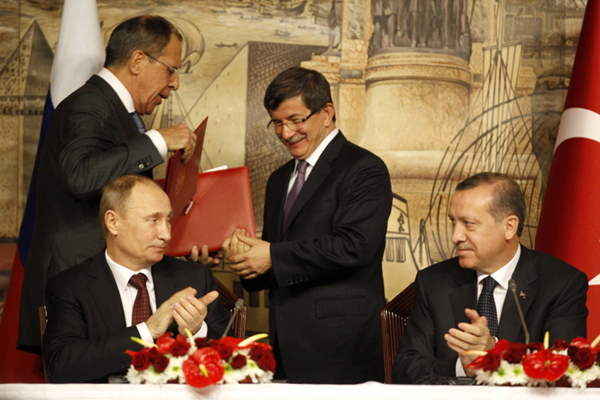 The Kremlin has not yet decided what measures will be taken to punish Turkey for the downed Su-24.  For now, the Russian government had decided to strike Turkey financially.  Turkish imports were banned and a one-sided visa regime for Turkish citizens entering Russia was introduced.  In Turkey, the visa-free regime for Russian citizens was never cancelled.
Putin, and more precisely the Russian government, is trying to kill two birds with one stone. In situations in which the Russian budget decreases sharply and foreign currency reserves shrink, the main goal of the Ministry of Finance is to preserve foreign currency and to diminish its withdrawal from the country.
The sanctions imposed by Russia serve this goal. By punishing foreign manufacturers, Putin receives a short-term result when foreign businesses that export to Russia start to put pressure on their own government with a plea to exhibit more friendship towards the Kremlin.
In any case, both foreign businesses and the governments of the new “enemies” of Russia bear substantial losses financially. However, after a period of time, everything comes to an end; businesses lose interest in the Russian market and find different export market. This is also true of Germany, Poland, and Ukraine.
At such point, the government no longer feels the pressure applied by the businesses, and the tone of the conversation with the Kremlin becomes much sharper. In that case Moscow can do nothing and must resort to bribery in these countries, primarily right-wing and usually far-right political parties.
It's Turkey's turn to awaken from its infatuation with Russia. If Russian-Turkish relations don't improve over the next six months, Turkey’s coasts will be void of Russian tourists, which will greatly affect the economy in those areas.
Medvedev and the Ministry of Finance of the Russian Federation are working towards this goal; Russian tourism to Turkey amounts to billions of dollars that leave the territory of Russia. This is also the case with the de facto ban on tourism to Egypt, despite the fact that relations with Cairo are much warmer.
In all likelihood Thailand is next in line; the Kremlin’s state-owned media has already started talking about the threat of ISIL attacks towards Russian tourists in this country.

The main problem in Putin's military scenario against Erdogan is, firstly, the membership of Turkey in NATO, and, secondly, the general anti-Russian sentiments in Turkey itself, which can be found in all strata of society and the political elite.

There is no pro-Russian opposition in Turkey, and hardly even potential for such opposition. One pivotal factor in this lack of opposition is the millions of Syrian refugees who have found refuge in Turkey over the last 4 years and are waiting for the end of the civil war that was supported and instigated by Putin.

Widening of the Syrian abyss

In Syria, Putin continues to escalate the situation. He does so as much by increasing Russia’s involvement as by provoking the West to either directly participate in the war or accept his conditions.
Gradually, Russian ground forces increase their participation in land operations. However, the expansion of bombing campaigns, which continue to happen almost exclusively on territory controlled by the Free Syrian Army (FSA), contributes to the fact that these territories are gradually taken by ISIL. Consequently, Russian aircraft actually work as a component of ISIL air support, which the Russian media has started to call by the Arab acronym Daesh as a sign of "solidarity" with France following François Hollande’s speech in Moscow. In addition, for the first time Russian bombers attacked Assad's troops, accusing the Americans. However, there is speculation that the Russian bombers were in fact bombing a column of defectors from the Syrian army. By the way, this would not be the first that that Russian airplanes carried out such attacks, as the first mission of the Soviet Air Force during the Afghan war was to bomb defectors of the army of Afghanistan. The expansion of the war in Syria and the West’s move towards direct military operations on the ground would fall into Putin's strategy of preserving his personal power. Direct war with the West would give Putin a reason to ask for more power. The Kremlin’s persuasive media arm tirelessly works towards influencing the Russian people to rally around Putin personally as a president and a supreme commander.