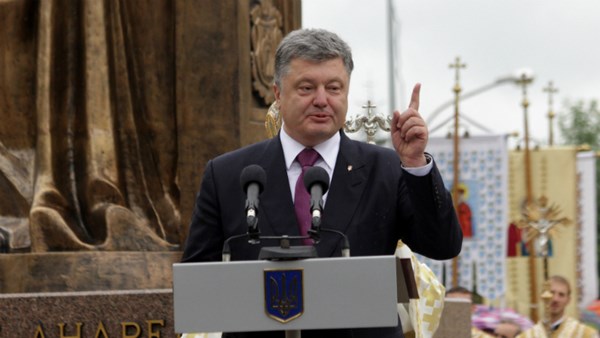 President Petro Poroshenko will sign a law banning St. George's ribbon as soon as it arrives from the Verkhovna Rada. He stated this on Sunday in his speech on the occasion of the Day of Remembrance of the Victims of Political Repression in the Historical-Memorial Reserve 'Bykivnia Graves'.

Poroshenko noted that eight years ago the OSCE Parliamentary Assembly adopted a resolution on the identity of the Nazi and Stalin regimes and proposed a joint day for the memory of the victims of Stalinism and Nazism. This, he maintains, is the reason that Ukraine has been de-communized.

"By the way, my Ukrainian people are also able to survive even without social networks controlled by the KGB/FSB. And, I will also sign the law on the banning of St. George's ribbons, as soon as it arrives from the Verkhovna Rada," the President said.

According to him, the St. George's ribbon is not a symbol of the Second World War but a symbol of aggression against Ukraine in 2014-2017 as "the separatists wearing these ribbons kill our soldiers day and night."
"In the end, unfortunately, Russia itself made this ribbon illegal through its policy towards Ukraine," Poroshenko is convinced.

On May 15, 2017, the President signed a decree that put into effect the decision of the National Security and Defense Council to update the list of sanctions against a number of Russian companies, including Aeroflot, VKontakte and Odnoklassniki, Yandex and others.

The following day, the Verkhovna Rada supported the bill banning the manufacture and propaganda of the St. George's ribbon in Ukraine.