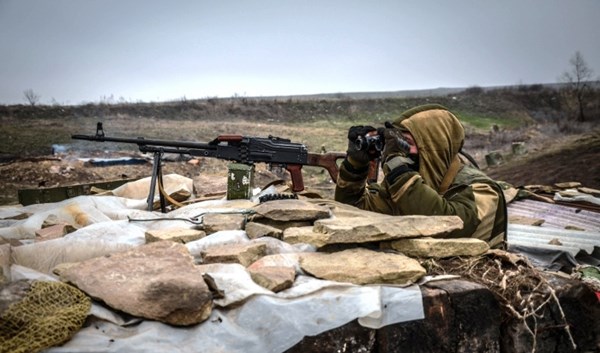 According to him, during the last three weeks, separatists moving from Yasynuvata have been trying to move through Avdiivka's industrial zone, which is located near the Yasynuvata railway junction.

"Militants shelled using artillery and mortars, then sabotage groups tried to get through our observation posts to the territory under our control," Zhmurko said.

"Yesterday, in the vicinity of the fortified area ‘Zenith’, militants used a powerful self-propelled 122 mm caliber cannon," he added.

"They [separatists] are trying to dislodge our forces from the industrial zone, so that we won't be able to control Yasynuvata junction, in the event that they move their military vehicles and equipment closer to our positions," Zhmurko said.

He added that Ukrainian forces have control over the exchange of fire. "We've adjusted our aim accurately there," he said.

The Ukrainian spokesman explained that the OSCE is active in Avdiivka during the day, so separatist attacks in the area begin after dusk.

Meanwhile, journalist Roman Bochkala wrote on Facebook that the attacks occurred at night and happened in waves, and that the infantry was sent to be "slaughtered".

"Russia sent in reinforcements – its military," he wrote.

Zhmurko added that, according to the preliminary information, seven people were injured near Avdiivka the day before, and one was killed.