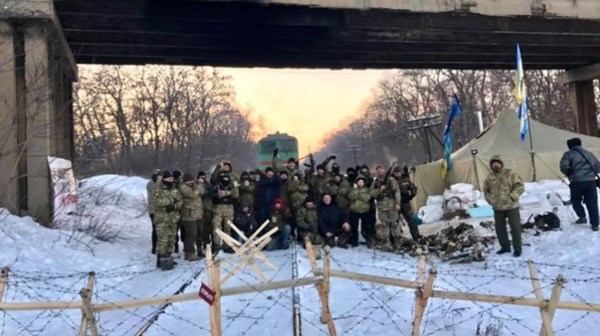 It has been one week since Ukrainian veterans blocked the Luhansk-Lysychansk-Popasna railway in order to curb trade with the territories of the Luhansk and Donetsk People’s Republics, which are not under Ukraine’s control. Over time, the blockade gathered many supporters and opponents. Supporters consider the blockade as real way to stop the war in the Donbas, while opponents suspected Deputies of attempting to exploit it for PR purposes.

One the main requirements of the blockade participants was the release of Ukrainian POWs held in the separatist territories. However, having examined the scale of trade, the campaigners concluded that they actually can stop the war, as stated on the Facebook page of the blockade staff. The blockade participants accused Ukrainian authorities of making millions from trade with separatists. In addition, campaigners accused the Security Service of Ukraine of covering up the smuggling schemes.

“In a little over a year, the Security Service of Ukraine issued almost one hundred thousand permissions for shipments of different goods from Ukraine to the so-called Luhansk and Donetsk People’s Republics and for the shipments from these territories to Ukraine. The supplies of fuses, detonation cords, gunpowder, detonators, metals, spare parts for cars and locomotives from Ukraine to separatist-held areas of Donetsk and Luhansk seem cynical, as these products directly strengthen the defense capabilities of the enemy,” reads the statement of blockade staff.

The head of the international charitable foundation Come Back Alive, Vitaliy Deynega also believes that the Security Service of Ukraine (SBU) is involved in the trade process. The People’s Deputy of Ukraine, Volodymyr Parasyuk, even accused the SBU of supporting illegal trade with Luhansk and Donetsk People’s Republics.  In turn, SBU denied any involvement and called the statement populist.

The participants of the blockade stated that 47% of the cost of coal, purchased in the Donbas, went to the budgets of Luhansk and Donetsk People’s Republics. Ukrainian activist, leader of Prava Sprava social movement, Dmytro Snegiryov, stated on 112-Ukraine TV that together with the coal separatists ship to Ukraine alcohol, tobacco and unlicensed gold.

According to Snegiryov the shipments of coal from the separatist-held territories raise a lot of questions as well. He explained that in addition to anthracite, separatists supply T-grade coal to Ukraine. The T-grade coal has significantly lower quality and price. Currently, there are seven thermal power plants in the country that use anthracite. The expert believes that Ukraine can easily find an alternative to the Donbas coal.

A participant of the blockade, soldier of Aidar battalion, Sergey Gatsenko, believes that the threat to the country’s energy system due to a disrupted supply from the separatist republics is a myth. “There are two types of coal: anthracite and gas coal. The fact is that both types of coal are available in the territory of Ukraine,” Gatsenko said. The People’s Deputy of Ukraine, Volodymyr Parasyuk supports this opinion. According to him, Ukraine has state-owned companies that mine anthracite.

“However, we continue to purchase coal from the mines of Ukrainian oligarch, Rinat Akhmetov, where there are some kinds of payoffs and financial schemes,” Parasyuk added. The official also noted that the Ukrainian war veterans are not the only ones who support the blockade. According to Parasyuk, Ukrainian army servicemen are also supporting it.

“How cynical is the fact that the railroad that we blocked goes a few kilometers away from front line positions of our troops. Just imagine: there is a fight going on and the train runs back and forth on the side of it. That is why the soldiers understand that they are there for a cover-up because the war is very profitable for those who earn millions,” Parasyuk noted.

At the same time, some experts and government officials claim that the blockade can pose a threat to the country’s energy independence. For instance, the Deputy Minister for the temporarily occupied territories and internally displaced persons, George Tuka, explained that the whole region can be left without electricity if the thermal power plant in Shchastya in the Luhansk region stops.

The Head of Luhansk Regional Military-Civilian Administration, Yury Garbuz, believes that there are risks to supplying the central and western regions of Ukraine with power. The Prime Minister of Ukraine, Volodymyr Groysman, is also concerned over the disruption of coal supplies from the Donbas. Groysman noted that, currently, there is no alternative to supplies of anthracite from the uncontrolled territories of the Donbas.

According to the Prime Minister, Ukraine consumes 24 million tons of coal for heat generation. Anthracite represents nine million tons. This coal is used at thermal power plants and extracted in the territory that is not under Ukraine’s control.

“We need to look at things the right way. If somebody is happy that he cut off electricity for Ukrainians then I’m really concerned over this and I want to note that we will do our best to ensure that Ukraine has enough coal for the needs of the population and the production of electricity,” the Prime Minister noted. A member of the Petro Poroshenko Bloc parliamentary faction, Vadym Denysenko stated that the blockade is now beneficial only for Russia.

“If the blockade started after heating season, I could say that people were forcing authorities to find ways of solving the problem [alternative to the Donbas coal]. Now, when frost is getting stronger every day, the blockade is an evil, primarily for Ukrainians,” the MP explained his position. It is interesting that Russia itself called the blockade a terrorist act.

Russia called the blockade “a terrorist act”.  The permanent representative of the Russian Federation in the Trilateral Contact Group on settlement of the conflict in the Donbas, Boris Gryzlov, believes that these events can result in the withdrawal of separate regions of Donbas from the financial-economic sphere of Ukraine.

The Director of the Centre for Applied Political Studies, Ukrainian political scientist, Vladimir Fesenko, believes that the issue of the blockade is exploited by certain politicians.

“I’m confused by the fact that organizers of campaign blocked precisely that railway, which separatists use for shipment of coal. Why haven’t they detained real smugglers…There are enough of them in the Donbas. This can be treated in different ways but coal supplies from the occupied territories don’t violate any laws. Supplies of goods by trucks are banned but not supplies by railway. They are controlled and regulated. So, if you want to block, block the real smuggling but not coal supplies,” Fesenko stated.

The experts from both camps of the supporters and opponents of the blockade stated that Ukraine should have a policy aimed at eliminating the illegal trafficking of goods and strict control over its implementation.