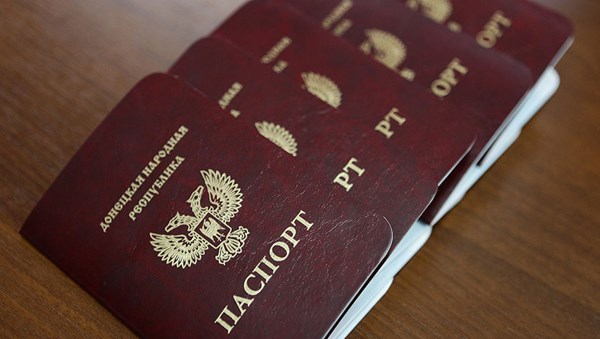 The temporary recognition of passports issued by the separatist republics is being used by Russia to exert political pressure specifically on Ukraine and not on our Western partners. By stressing the temporary character of the recognition of these documents, Putin is trying to accuse Ukraine of violating its commitments laid out in the Minsk Agreements: the elections, an all-inclusive amnesty, and a special status for these areas.

We shouldn't regard this move as the first step in the direction of the recognition of these republics, because Putin's plan is to return the territories to Ukraine, but on his own terms.

As a result of the recognition of these passports, albeit temporarily, the residents of the separatist-held territories can freely enter the Russian Federation. Previously, in order to reside in Russia, it was necessary either to receive a permission for stay after the 90 days, or apply for refugee status. These procedures are quite lengthy and complex. However, after the decision to recognize these document was made, everything is simplified. What's in it for Ukraine? This makes it possible to help the population that considers itself an integral part of the Russian world, to go to the homeland, the long-awaited Russian Federation. Accordingly, once an attack by Ukrainian troops begins, those who associate themselves with Russia, will seize the opportunity to leave and head for the neighboring state.

I am convinced that Ukraine should take a tough stance. If Russia recognizes passports, then it should recognize its commitment to social and economic security as well, in the form of electricity, gas, water, and pensions. The Ukrainian government invested 45 ($1.66 B) to 70 ($2.59 B) billion hryvnia into the separatist-held territories. This is actually a black hole where it is impossible for the Ukrainian economy to function and develop normally. If we compare this to the military budget, which is about 100 billion hryvnia ($3.7 B), it appears that a significant portion of this budget was spent on the separatist-held territories.

However, it is worth noting that Russia would not dare make an effort in the future to replace the passports of the ORDLO with Russian ones and in this way make legitimate grounds to protect their citizens. There will be no Russian passports. They are repeating the same scenario from Abkhazia, Transnistria, and South Ossetia. This is a well-established scenario for Russia. The first step is the temporary recognition of passports, the second – should Ukraine not succumb to blackmail, is the freezing of the conflict. But in any situation, no one will issue Russian passports there, because in Russia, they are well aware that the millions of people in the separatist-held areas of the Donbas are unwelcome in Russia as citizens.

Russia will not take on the additional economic burden for itself in the form of funding these territories at the federal level. Russian leaders are pragmatists and they will in any way possible try and realize their scenario, which is a return of the separatist-held territories of the Donetsk and Luhansk regions back to the jurisdiction of Ukraine as either a federation, confederation, or with a special status.

Currently, Russia is trying to make Ukraine look like they are not fulfilling their obligations in the eyes of the West. This is what is behind the escalation of the conflict in Avdiivka. When the military pressure did not prove to be effective, the Russians moved on to political and diplomatic pressure, namely through the temporary recognition of passports.

The key word, to which attention is not paid and the concept of which is being manipulated is “temporary.” Which is what Russia is trying to use to its benefit. That is, if Ukraine fulfills its obligations with respect to the elections, the all-inclusive amnesty, and the granting of a special status, Russia, in response, will withdraw the recognition of the passports.

Currently, there is also no cause for concern over the supposed Russian nationalization of Ukrainian enterprises in the separatist-held territories. Most of those companies are, in fact, Russian. They are directly or indirectly owned by Russian businesses.

As for the West, they expressed concern once again, but at the same time clearly stated that there is no reason to increase the number of members of the OSCE mission in eastern Ukraine. Thus, the West has clearly demonstrated that there will be no further actions other than the expression of concern and worry and there will be no concrete steps to address the situation in eastern Ukraine. Ukraine should rely solely on its own efforts.