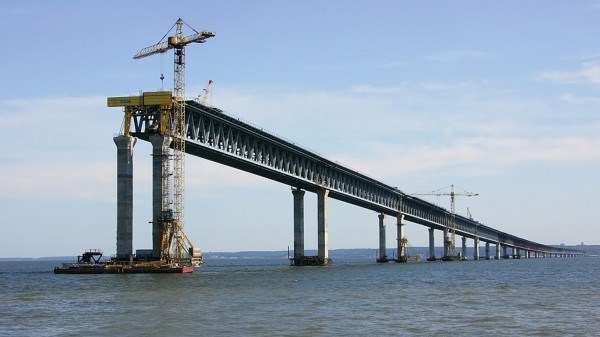 Russia’s introduction of shipping restrictions through the Kerch Strait in connection with the construction of a bridge will lead to losses for Ukrainian ports and will be challenged in court, stated Deputy Minister of Infrastructure of Ukraine Yuriy Lavrenyuk, as reported by Interfax-Ukraine.

“The Ministry of Justice, within the framework of the existing lawsuits against Russia, has singled out the problem of the blocking of the Kerch Strait and imposition of restrictions on navigation. Now the lawsuit is being prepared, and under consideration are losses for the Mariupol and Berdyansk commercial ports,” he said.

Lavrenyuk also noted that the problem of the construction of the Kerch port, which was stressed by the trade unions of the Berdyansk port, is currently being solved jointly by the Foreign Ministry and the National Security and Defense Council of Ukraine.
“This is a global, political and complex issue, but we will definitely solve it,” the deputy minister said.

Lavrenyuk stressed that the Ministry of Infrastructure is initiating a reduction in the rates that state companies have to transfer from their net profit to the state budget from 75% to 50% in order to allocate more funds for the development and updating of the infrastructure.

Earlier, the Crimean prosecutor’s office announced the risk of an environmental disaster due to the construction of the Kerch Bridge and opened a criminal case with regard to it.