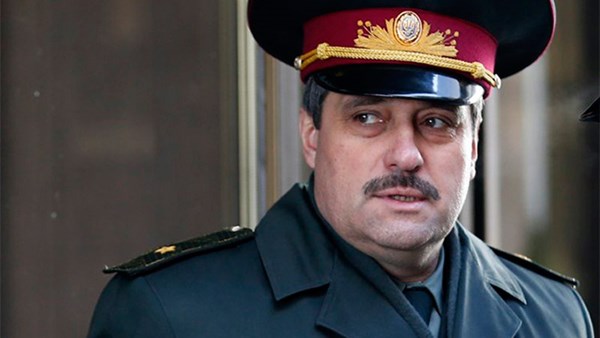 On March 27th, the Pavlohrad District Court found Major General Viktor Nazarov guilty of professional negligence in the crash of a military transport aircraft near Luhansk in July 2014 that resulted in the deaths of 49 Ukrainian soldiers.

General-Major Nazarov was sentenced to seven years in prison in accordance with part 3 of Article 425 of the Criminal Code of Ukraine – Professional Negligence by a Military Officer which caused Serious Consequences.

The court's decision states that General Nazarov, in accordance with his official duties, had all the necessary means to prevent the deaths of the servicemen, however as a result of the negligence while performing    his duties and failure to take into account the information provided by military intelligence, he did not use those means.

Almost immediately after the verdict was announced, the Chief of the General Staff of the Armed Forces of Ukraine, Viktor Muzhenko, expressed his position in a Facebook post saying that he believes that the sentence received by General Nazarov sets "a dangerous precedent."

"In Ukraine, which is at war for the third consecutive year, a dangerous precedent has been set that could have fatal consequences for the State. Bravo. The aggressor is applauding ... A question is posed to the commanders of all levels of the military whether they should defend their country in which the judicial system has established that all your decisions and actions can be treated as a crime.'' Muzhenko wrote.

Furthermore, Defense Minister Stepan Poltorak believes that the decision of the Pavlohrad court “was as though it was made to help the Kremlin." According to Poltorak, "a dangerous precedent is created when a court's decision might dangerously affect the thought process of military personnel during an armed conflict...This decision does not benefit the motivation of servicemen, and does not raise morale and confidence that what they are doing is right."

The Supreme Commander of the Armed Forces of Ukraine, Petro Poroshenko, also expressed his position on this issue. The President of Ukraine believes that it is necessary to initiate the revival of military courts. "I intend to propose the revival of special military courts in accordance with existing international practices. The actions of the commanders in a combat situation must be evaluated by military experts and military judges, not civil ones." Poroshenko said.

The reaction of senior military leadership in connection with the court verdict in General Nazarov’s case shows that the government is aware that this case creates a precedent for the existence of personal responsibility and opens the door to similar lawsuits concerning other officials. The question of who is responsible for numerous losses at the beginning of the war - at Luhansk airport, during the battle of Ilovaisk, and other episodes of the war - continues to be unanswered.

One of the episodes of war occurred on 19 August 2014. According to the analytical department of the Prava Sprava public initiative, a Russian armored column consisting of more than 40 military vehicles entered Luhansk which was blockaded by the Armed Forces of Ukraine. Ukrainian military leadership was informed of the precise route of the enemy movement, but no countermeasures were implemented.

The information provided by the Prava Sprava public initiative on the Russian armored vehicles entering Luhansk was confirmed by the coordinator of the Information Resistance project, Dmytro Tymchuk. "The fact that on Tuesday a column of military vehicles broke into Luhansk to help local militants is confirmed. Part of it came from Russia earlier, and the other part entered the Donbas from Russia on Tuesday," he wrote.

According to Tymchuk, "Overall, several dozen vehicles broke into the areas on the outskirts of Luhansk, including 40 heavy armored vehicles. Another part of this column has already entered the city.”

"How a convoy of vehicles was able to break through the line of encirclement, given that Luhansk is sealed by a ring of checkpoints and fortifications of the Ukrainian Armed Forces, we cannot say at the moment" the Tymchuk said.

The presence of a column of Russian armored vehicles and servicemen was also confirmed on the air of Hromadske.TV, by the commander of the Ukrainian forces in Luhansk region, Igor Voronchenko. "Three days ago an armored convoy of Russian Armed Forces came into Ukraine. It's about 1,200 people, probably Russian servicemen, 150 armored vehicles and equipment - including tanks and Grads," he said.

On August 24th, a counter attack by Russian forces and local militants began, which led to heavy losses by the Ukrainian army. That is where the question arises as to why Muzhenko let the convoy through? At that time military leadership claimed that Luhansk was securely surrounded by the Armed Forces of Ukraine.

Presently, the military investigation committee on the Ilovaisk tragedy has reached some conclusions, namely on the origin of the main offensive, which cites it as the result of short-sighted actions by military leadership. However, no one was punished, and the conclusions of the committee have yet to become the basis for criminal proceedings.

This makes it clear that there is a deliberate blocking of the investigation of Ilovaisk tragedy that has continued for three years. It is obvious that the actions of the authorities aimed at protecting Nazarov which manifest themselves in the statements by top officials will continue putting pressure on the proceedings of the court of appeal.

The behavior of the authorities shows that they are ready to make every effort to save Nazarov from prosecution. We will witness fierce fighting and attempts to save Nazarov from punishment. The military leadership has been driven to a dead end, that's why they will do anything not to create a precedent, including using force against journalists and participants in the process.

If General Nazarov is actually sentenced to time in jail, the question will arise, as to who's next?

Nazarov could be easily linked to the current head of the General Staff of the Ukrainian Armed Forces, Viktor Muzhenko, who according to information from public sources is a direct protégé of Petro Poroshenko. Even a hint of a criminal case against Muzhenko will noticeably damage the reputation of the president, which is not the best thing that could happen to Poroshenko before the presidential election.

The loss of Muzhenko will mean for the ruling elite that not only will military defeats can be publicized, but that they will also lose control over financial flows, as the Armed Forces is one of the largest recipients of funds in a country during wartime.

However, I am confident that the authorities will not be able to save Nazarov from prison. There is a huge positive aspect to be found in Nazarov’s sentencing. It is evident that this occurred due to pressure from the public and the participation of an unbiased media. Society managed to make a dent in the injustice that prevailed in the first year of the war with regard to the impunity of the leaders of the Armed Forces. If General Nazarov will end up behind bars, this case will become the impetus for the investigation of other instances of misconduct and negligence of the High Command of the Ukrainian Armed Forces.

Regarding the initiative to create a military court to be entrusted with such cases, this is being motivated by the desire of authorities to influence the court so that Nazarov's case would no longer affect the top leadership of the Armed Forces.

The Venice Commission, in its report for 2009, criticized the extensive system of military prosecutor's offices stating that it reflects a typical Soviet approach through which the prosecution primarily acted as a monitoring body over the activities of the government.

In the judicial systems of most European countries the above mentioned functions are transferred to the existing prosecution system and the fulfilment of the requirements for knowledge and experience is achieved through the internal specialization of individual prosecutors. Some countries have chosen the path of greater specialization. For example, in The Netherlands, criminal prosecution for war crimes is carried out in the respective military chambers in the local civil courts by the prosecuting agency that specializes in that category of cases.

Regardless of the outcome of the appeal, the Prava Sprava public initiative will continue to demand the clarification of all the dark and painful events of the Russian-Ukrainian war.

Nazarov was tried for the Il-76 military airplane icident, which took place on June 14, 2014 at the Luhansk airport, claiming 49 lives. On November 18, 2014, The Military Prosecutor’s Office announced that Nazarov was suspected of involvement in the disaster. The Prosecutor’s Office claims that the general, being one of the leaders of the Anti-Terrorist Operation (ATO) at the time, did not pay attention to the SBU’s (Security Service of Ukraine) information about the threat of the plane being downed, and gave authorization for the special services to transport a military unit to the Luhansk airport.