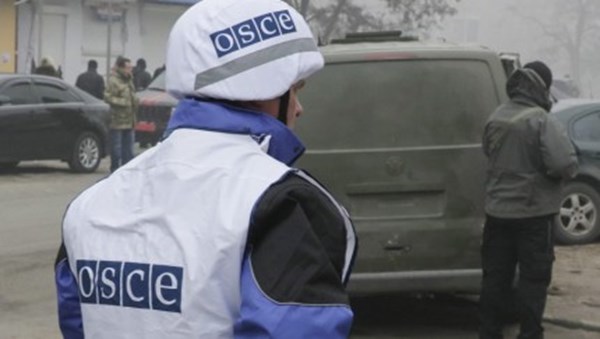 Pro-Russian militants are holding two employees of the OSCE Monitoring Mission in Horlivka and demand the release of a militant detained by the Ukrainian military on October 13, reported the representative in the Trilateral Contact Group from Ukraine Sergiy Garmash on Facebook.

According to the report of the OSCE, on October 17 at 17:00, two men 30-39 years old in civilian clothes entered the hotel and told the OSCE Special Monitoring Mission representatives that they are no longer allowed to move freely within the hotel and the parking area. They said that OSCE representatives are not allowed leave the hotel until a militant detained by the Ukrainian Armed Forces near the village of Zolote was released.

On October 13, the Ukrainian military detained Russian officer Andrei Kosyak near the village of Zolote. He is suspected of being a member of a group of militants, who carried out reconnaissance at the abandoned positions of the Ukrainian Armed Forces.

"57 countries are members of OSCE, and all decisions in it are made by consensus. That is, Russia also gave its consent to send the OSCE SMM to the Donbas and guarantee immunity to its members. And the fact that the members of the mission, are held hostage by militants financed and controlled by Russia is a challenge of the Kremlin junta to all the other 56 OSCE member states," Garmash said.

Russian media reported that after the detention, the so-called Luhansk People’s Republic had suspended all contacts with Kyiv at the Joint Ceasefire Monitoring Centre until its officer is released.

Earlier, the OSCE notified that it was stopping work in Donetsk for security reasons.