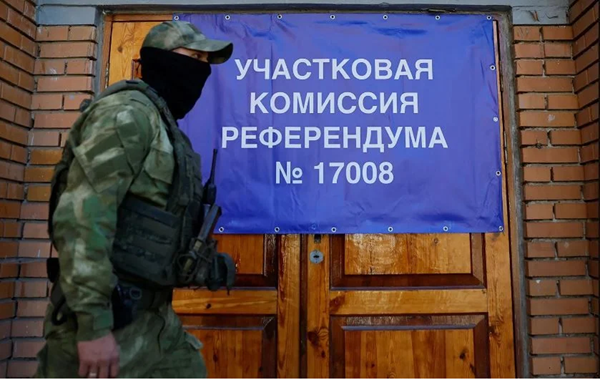 "Polling stations" have opened in the so-called Donetsk and Luhansk People’s Republics, Zaporizhzhia and Kherson regions. "Voting" in all territories will last until September 27. Also, polling stations also began to open in Russia, where, according to the Kremlin, refugees will vote.

According to TASS, "in the interests of security", in the first four days, the voting will be done through door-to-door visits.

The United States, the European Union and NATO countries have repeatedly stressed that "referendums" are Russia's violation of Ukraine's sovereignty and territorial integrity and no one recognizes "any claims of Russia to any annexed territories."

French President Emmanuel Macron called the "referendums" "parody and cynicism." The idea of holding them "would be ridiculous if it were not so tragic," he added. German Chancellor Olaf Scholz has also repeatedly said that Germany does not recognize "these fictitious 'referendums', calling them unacceptable.

"Russia, its political leadership and all those involved in these 'referendums' and other violations of international law in Ukraine will be held accountable," EU High Representative for Foreign Affairs and Security Policy Josep Borrell said in a statement. In addition, Brussels "will consider additional restrictive measures" against Moscow, he said.

"We will not give anything of our own, and if the occupiers go ahead with these pseudo-referendums, they will close for themselves any possibility of negotiations with Ukraine and the free world, which the Russian side will definitely need at a certain moment," said Ukrainian President Volodymyr Zelensky.

Fictitious "referendums" in the occupied territories of Ukraine will not change anything from the point of view of international law, said adviser to the head of the president's administration, Mykhailo Podolyak. "Russian propagandists are in love with 'referendums'. There's bad news for them. There is a global consensus and international law. Definitely: Donetsk, Luhansk, Crimea - this is Ukraine. Any attempts to repaint the flags are a fiction, it will not change anything either for us or for our partners," Podolyak wrote.