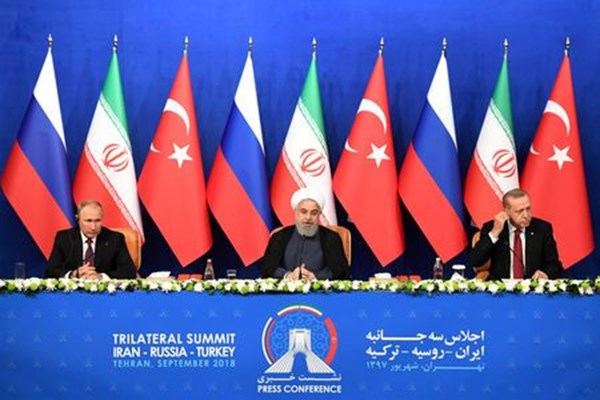 At the summit in Tehran on Friday, September 7, Russia, Iran and Turkey failed to agree on a unified approach to the upcoming Syrian government troop's attacks in the province of Idlib. The final declaration of the meeting does not mention any specific actions, reports Deutsche Welle.

The statement of the presidents of the three countries, Vladimir Putin, Hasan Rouhani and Recep Tayyip Erdogan, consisting of general phrases, speaks only about the determination to protect the civilian population and improve the humanitarian situation, as well as the intention to continue military operations against the terrorist group Jabhat al-Nusra and Islamic state. Judging by the statements made by Putin, Erdogan and Rouhani at the summit, they could not reach a more unified position regarding the situation in Idlib, notes the dpa agency. Erdogan sought to include the ceasefire provisions the joint final statement, while Russia and Iran insisted on continuing military operations in Idlib.

Erdogan warned against the "massacre" in Idlib. According to him, the attack on the province will lead to "a catastrophe, bloodshed and a huge humanitarian tragedy." Russia, Iran and Turkey, as guarantors of the de-escalation zone created last year, should not allow a new wave of violence in Syria, said Erdogan. In his opinion, an attack on Idlib could lead to the collapse of the political process in the country.

Putin, in his turn, noted that the ceasefire would be desirable, but representatives of the armed Syrian opposition, as well as  Jabhat al-Nusra and ISIS,  do not participate in the summit. The province of Idlib is located in the north of Syria and shares a border with Turkey. The authorities in Ankara fear that the military actions in this region, where about 3 million civilians are located, will lead to a new wave of refugees. Turkey has already accepted about 3.5 million Syrian refugees.