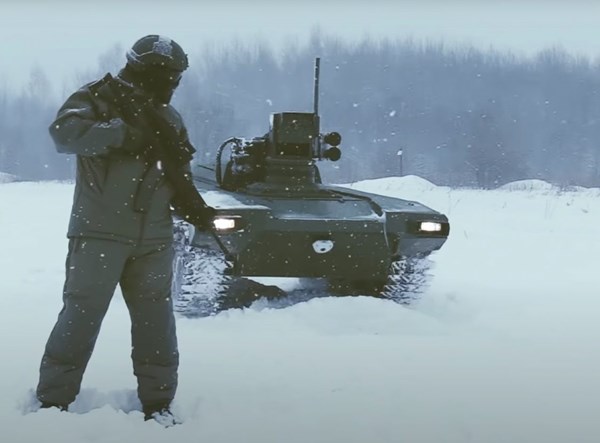 Russia intends to use the combat robotic platform Marker in the war against Ukraine, said the head of the group of military advisers and the scientific and technical center Tsar's Wolves, Dmitry Rogozin.

"The Marker has already been tested as a security system for the Vostochny cosmodrome, providing control of its perimeter. Now, it(or rather, they – there will be several such machines) will have to be baptised in combat in the Donbas," Rogozin said.

He added that this robot is a joint project of the National Center for the Development of Technologies and Basic Elements of Robotics FPI and the NGO Android Technics (the developer of the infamous robot Fedor).

"The Marker robot has vision capabilities and an automatic control system. It works autonomously in electronic warfare conditions, providing target designation of enemy objects at a distance of at least 15 km, and also prioritizing enemy targets that are in the fire range with its own firepower," Rogozin said.

According to him, the inspection team under his supervision is organizing tests of the new robot. "I will inform you about the results," he promised.

Earlier, Russian Defense Minister Sergey Shoygu said that a lot of work is underway on the "weapons of the future." Serial production of combat vehicles with artificial intelligence has already begun.