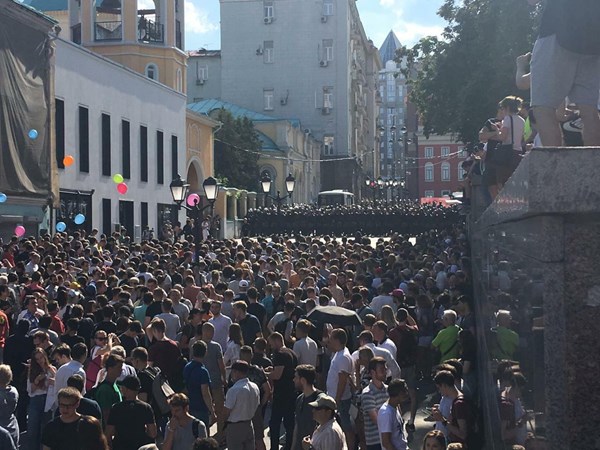 Russian police has detained more than 500 people in the center of Moscow, during unapproved rally to demand that independent candidates be allowed to take part in the elections to Moscow city council, reports the Current Time news outlet.

About a dozen opposition and independent politicians, whom the Moscow City Electoral Commission did not allow to take part in the city council elections, were going to hold a mass rally together with voters.

They failed to do this. The police first detained the politicians, and then began to detain all those who came to the action. Violent broke out in Stoleshnikov Lane.

According to the OVD-Info website, the detainees are taken to police stations away from the city center. The police officers used batons during the detentions which resulted in a number of wounded.

Organizers of the event insist that the event is a legitimate meeting of Moscow residents with candidates for municipal deputies.

Moscow police say that only about 3,500 people came to the action, "of whom about 700 journalists and bloggers".

According to the Current Time, people did not have any posters in their hands, they were detained simply for being present in the street. Police officers ordered the people in Tverskaya street to disperse, and those present in the street had their documents, bags and backpacks checked.

Opposition politician Alexei Navalny announced a rally outside Moscow City Hall in the city center on July 27 last week. He proposed to hold an indefinite protest demanding to allow candidates who are not registered to participate in the elections. On July 24, the court arrested him for 30 days.