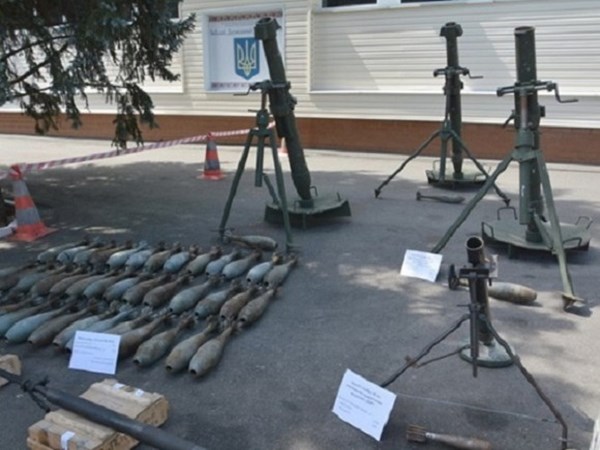 The Security Service of Ukraine (SBU) showed weapons, which, it is alleged, the deputy of the Verkhovna Rada Nadiya Savchenko and head of the prisoner liberation center “Officers Corps” Volodymyr Ruban, planned to use for terrorist attacks in Kyiv.

The SBU stated that in part, the suspects were stockpiling automatic weapons, mortars, grenade launchers and ammunition to start a coup. These weapons were received from representatives of the self-proclaimed republics of Donetsk and Luhansk regions.

According to the investigation, the group that was led by Savchenko and Ruban were planning a mass shooting in central Kyiv and the government quarter including the building of the Verkhovna Rada.

“Examinations show that almost 70 thousand citizens could have been in this planned area of attack; this area houses kindergartens, schools and medical institutions,” said Alexander Ruvin, the director of the Kyiv Scientific Research Institute of Forensic Science.

SBU stated that the investigation has been completed. Currently, the suspects are reviewing materials from the criminal case. When they are finished, the case will be sent to court.

Savchenko and Ruban have been under arrest since Match. Both defendants do not recognize their guilt.