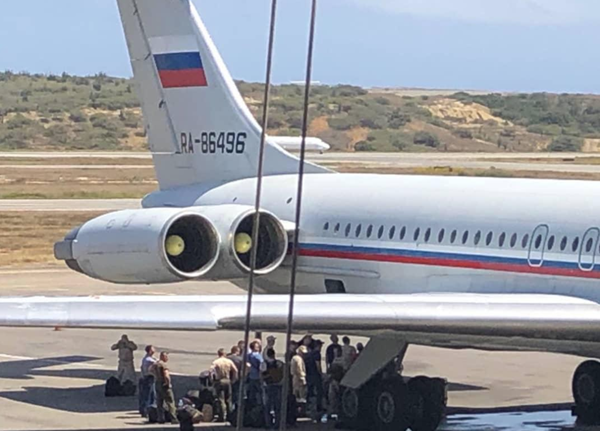 Two Russian military transport planes landed in Venezuela on 23 March, according to flight-tracking data from CivMilAir. The Venezuelan news outlet El Nacional reports that the planes were transporting a group of Russian soldiers led by Colonel General Vasily Tonkoshkurov.

El Nacional cites a post on Twitter by reporter Javier Mayorca, who claims that “a group of 99 Russian soldiers” had landed at the Caracas airport, where they were met by Marianni Mata, head of the Venezuelan Defense Ministry’s international affairs and integration department. Shortly thereafter, a cargo plane arrived at the same terminal, carrying 35 tons of cargo for the Russian soldiers, Mayorca claims.

Mayorca did not specify the source of his information, but backed it up with photographs published by the Twitter user FedericoBlackB, a digital communication consultant and corruption investigation specialist according to his Twitter profile description. The photographs show two planes with the Russian flag and livery: an An-124-100 Ruslan and an Il-62M with the registration numbers RA-82035 and RA-86496 respectively. According to open source information, the latter belongs to the 223rd Flight Unit of the Russian Air Force.

In the photographs, there is also a group of people standing next to the plane, some of them clad in a khaki uniform.  A video of the Russian An-124 at the airport was also published by Twitter user Cristian Crespo F.

Data from the flight-tracking website CivMilAir confirms the arrival of the two Russian planes, and indicates that they both departed from Syria. Another tracking service, FlightRadar, shows that planes with these registration numbers had flown to Syria from the Chkalovsky Airport near Moscow.

This is not the first time that these two planes have visited Venezuela. According to MilRadar, the same two planes accompanied the Russian Tu-160 strategic bombers that traveled to Caracas to participate in a military exercise in December 2018.

Colonel General Vasily Tonkoshkurov, whom Mayorca identified as the commander of the newly arrived Russian troops in Venezuela, has been head of the Chief Organizational Mobilization Directorate of Russia’s General Staff since 2013. In May 2018, he was appointed chief of the Ground Forces headquarters.

According to the Russian news outlet Novaya Gazeta, the aircraft with the registration number RA-86496 made a flight from Russia to Caracas and back at the start of March. During part of the flight, its transponder was deactivated, and so its entire route could not be tracked.

Aircraft from Russia’s 223rd Flight Unit make regular flights to Russia’s base in Syria. The Tu-154 that crashed en route to Latakia in December 2016 was part of this unit. Citing data from FlightRadar, Radio Liberty reported that the Il-62 RA-86496 has made more flights to Khmeimim than any other plane in the unit.

In January, Reuters reported that members of a Russian private military company had been sent to protect Venezuelan President Nicolas Maduro, although this was denied by the Venezuelan Foreign Ministry. On 31 January, Russian Deputy Prime Minister Yury Borisov also denied that Russia has any military presence in the Latin American country.