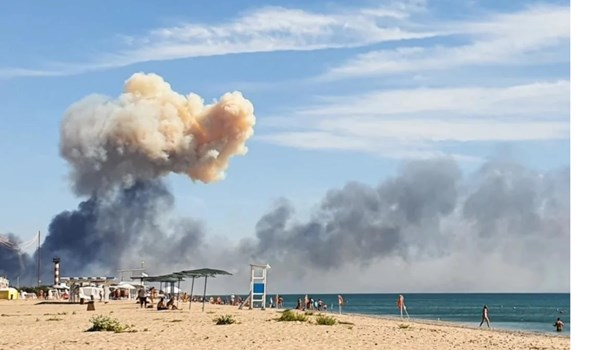 The Ukrainian military launched missile strikes on the Russian air bases in the annexed Crimea, writes the Commander-in-Chief of the Ukrainian Armed Forces, General Valeriy Zaluzhny and the First Deputy Head of the Defense Committee of the Verkhovna Rada, Lieutenant General Mykhailo Zabrodsky in an article published by Ukrinform.

The authors say that that the main feature of Russia's war against Ukraine is "a considerable disproportion in capabilities." At the same time, although it is impossible for the Ukrainian military to avoid such a disadvantage, the Ukrainians can "counter the enemy with their ability to act in the similar way and at a similar range."

"This is thanks to weapons systems or certain names of ammunition with an appropriate range supplied by Ukraine's partners," the authors say.

"A comprehensive approach should be applied to the re-equipment of artillery, missile troops, tactical aviation and the Naval Forces of the Armed Forces of Ukraine and other components," the article says.

Zaluzhny and Zabrodsky point out that one of the main examples that this approach was right is the successful efforts of the Ukrainian Armed Forces "to physically bring the hostilities to the temporarily occupied territory of the Autonomous Republic of Crimea."

"This is a series of successful missile strikes on the Crimean air bases of the enemy, primarily on the Saki airfield," the article says.

On August 9, the Saki military airfield in the Russian-occupied Crimea was rocked by explosions. The Russian Defense Ministry explained this incident as "the detonation of some aircraft ammunition."

The satellite images of the air base showed that Russia suffered the largest losses in aircraft since the Second World War.