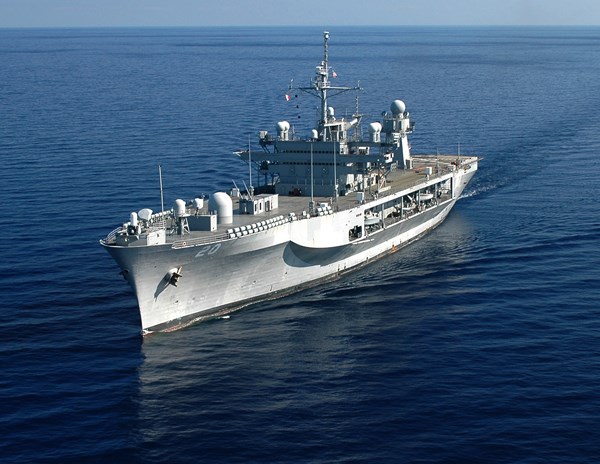 One week before the meeting of Vladimir Putin and Donald Trump in Helsinki, the US Navy has begun large-scale exercises in the Black Sea.

The Sea Breeze 2018 exercise was initiated on Monday, involving Ukraine’s Black Sea Fleet and forces from 18 NATO countries, a total of more than 2,000 military personnel, as well as 30 ships and military aircraft.
The USS Mount Whitney, flagship of the US 6th Fleet, was deployed in the Black Sea to take part in the drills, serving as the command center for all the operations. TASS reports that it entered the Port of Odessa on July 7, one day after a destroyer, the USS Porter, arrived there.

During the drills, which will run from July 9-21, participants will rehearse assignments related to the planning and execution of naval operations in accordance with NATO standards in the Odessa and Mykolaiv regions of Ukraine and in the north-western part of the Black Sea, the Ukrainian Navy’s press service reported.
The primary elements of the exercise will be anti-ship and anti-submarine defense, amphibious landings, and tactical maneuvering.

Russia intends to respond to the US missile with firing drills off the coast of Syria. The Russian drills will start on July 11 and last for two weeks, according to a notice to commercial pilots published by the Russian Defense Ministry last week.
A region in the eastern part of the Mediterranean Sea, between the Syrian coast (in the Tartus region) and the island of Cyprus, has been reserved for missile launches.

The Project 21631 small missile ships Grad Sviyazhsk and Velikiy Ustyug departed from Sevastopol to enter the Mediterranean Sea. The recently commissioned Vyshny Volochyok, a ship of the same class, is also due to travel to the Mediterranean. The small missile ships are armed with Kalibr missiles, among others.
The US and Russia are currently exchanging “position documents” for the meeting of Putin and Trump, Russian Presidential Press Secretary Dmitry Peskov said on Monday.
He added that preparation for the negotiations was being carried out “on an expert level”.
According to the Russian Public Opinion Research Center, the majority of Russians (56%) do not expect any positive developments from the summit scheduled for July 16.