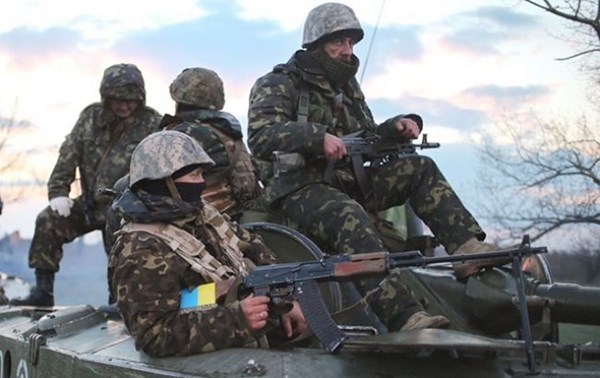 According to him, the fighting still continues.

"Building on the success and preventing further aggressive actions by the enemy, the anti-terrorist operation forces captured one of the front positions of the Russian occupation forces. At the moment the situation in Avdiivka’s industrial zone is complicated. The enemy continues to shell our positions with heavy artillery and mortars but our troops remain in their positions and are ready to repulse the enemy," Oleksandr Motuzyanyk said.

According to the official statistics provided by the headquarters, five Ukrainian soldiers were killed near Avdiivka on January 29th, and two more on January 30th. The separatists lost 24 people. Also the separatists’ battalion commander, Ivan Balakay, with the nickname, “the Greek,” was killed. He has been participating in the conflict since 2014 and was a leader of the Vostok battalion.

According to information received through radio interception, the volunteer Andriy Rymaruk, who is now in Avdiivka, says that at least fifty separatists were killed. According to him, due to heavy losses, Russian troops are bringing in significant reserves.

"The divisions of the regular Russian army are being brought from the remote places of the Donetsk region from different directions. The losses are huge and they [separatists] cannot hold their positions any longer. One of the radio intercepts, which was overheard by our guys says that about 100 people of the Main Intelligence Directorate (GRU) is moving in the direction of Amvrosiivka," Andriy Rymaruk said.

Now that the separatists' positions were captured, the Ukrainian military has control over the Yasynuvata junction, as volunteers report. According to an Avdiivka resident, Tatiana Shokot, as a result of the fighting, two Avdiivka civilians were wounded, schools are closed, and there is no power in the city.

"There is water, but no electricity, that's why we cannot call anyone neither those who are in the Khimik micro district nor the plant or work. People try not to get out of their homes, not even to buy food, " a resident of Avdiivka Tatiana Shokot said.

According to the so-called deputy head of the Ministry of Defense of the DPR, Eduard Basurin, the Ukrainian troops were the first to shoot and attack, but they were repulsed. "Just in a day the Ukrainian military lost more than 25 people and more than 40 were wounded," he said.

According to the separatists’ websites, two civilians were killed in the DPR due to shelling.