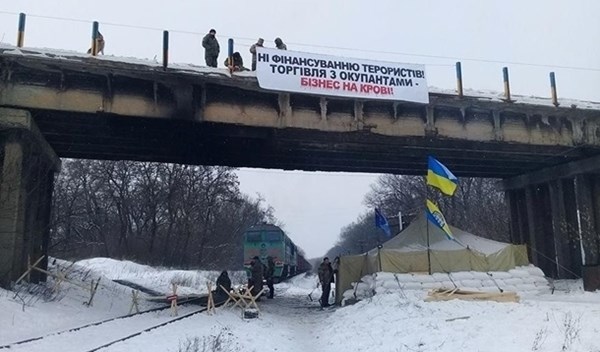 On the 16th of February a meeting of the National Security and Defense Council (NSDC) was urgently convened on account of the situation with the shipment of coal from the uncontrolled Donbas territories. At the end of January, war veterans in the Donbas blockaded several railway crossings in order to stop trade with separatists. Ukrainian President Petro Poroshenko thinks that the protesters are undermining the economy and interfering with the reintegration of the uncontrolled regions.

“They are not blockading the separatist-controlled territories, and they are not causing them problems. They are blockading Ukraine, blockading our struggle to restore territorial integrity. My firm position is that we need to return these territories to Ukraine through exclusively political, diplomatic means. And there is the erroneous position of politickers that we must cut off this territory and donate it de facto. It wasn’t you who brought these lands together, and it isn’t up to you to cut them off,” Poroshenko emphasized during the NSDC meeting.

Earlier the president stated that Ukraine could lose up to $2 billion as a result of the blockade, that the exchange rate is shattering, and that many citizens will join the “terrorist republic”.

“Ukrainian metallurgists could lose up to 300 000 jobs, the state – up to $2 billion in foreign currency earnings, with all the consequences which arise for the hryvnia exchange rate. In the occupied territories, tens of thousands of people will have no work. There is no labor market there, and a significant number of them will join the militants in order to earn money” Poroshenko said. This was his first public statement against the Donbas blockades.

Donbas war veteran and MP Simon Semenchenko, one of the organizers of the blockade, reacted immediately with a criticism of Poroshenko. He said that Poroshenko must remember his statement, and also that of Yuriy Lutsenko, leader of his party at that point in 2015. From the tribune of the Verkhovna Rada, Lutsenko then supported a complete blockade of the uncontrolled territories.

“This year they [the authorities] have radically changed their position – now they have become opponents of the blockade. In 2015, a presidential decree was issued regarding urgent measures to ensure our electrical energy efficiency. Boiler house equipment, enlarged reserves of nuclear fuel for our nuclear power stations, the deprivatization of mines, auditing the investment obligations of power station owners. They planned everything, but did not carry it out,” the blockade organizer noted.

In Semenchenko’s opinion, Poroshenko has conspired with the oligarch Rinat Akhmetov “regarding coal kickbacks in the separatist-held territories”.

Meanwhile, at the actual NSDC they did not decide whether or not to disperse the blockade. However, the actual participants in the blockade said that the Ministry of Internal Affairs is preparing a forceful dispersal of the protesters.

“The blockade headquarters turns to the patriots of Ukraine who have officially registered weapons to join the blockade in order to defend the unarmed volunteers together, the civil activists and other participants in the blockade, who are also in our redoubt,” says a post on the trade blockade and separatist headquarters’ Facebook page.

On February 16, mothers and wives of Ukrainian soldiers who are held in prisons in the separatist territories came to support the blockade participants. The blockade was started in January 2017 specifically for the release of prisoners.

Despite the NSDC meeting, war veterans in the Donbas have expanded the geographical scope of the blockade. Aside from the railway crossings, the first motorway has been blocked. The blockades were made at crossroads between the populated areas of Zolote-Novotoshkivke-Popasna.

The US and the EU also officially voiced their opposition towards the blockade. In particular, the US embassy in Ukraine expressed concern regarding the potential consequences that the blockade of coal shipments from the Donbas could have on the energy system of Ukraine.

At the embassy it was noted that the sides need to meet in order to take “short-term steps which will enable the legal goods of Ukrainian companies to cross the conflict line transparently, with the goal of preventing an aggravation of the situation for Ukrainians on both sides”. It was also remarked at the embassy that Ukraine must expedite the implementation of reform in the energy sector.

The European Union called on Ukraine to immediately end the blockade on the railway connection to the Donbas which could lead to a national energy crisis which citizens on both sides of the line will suffer from.