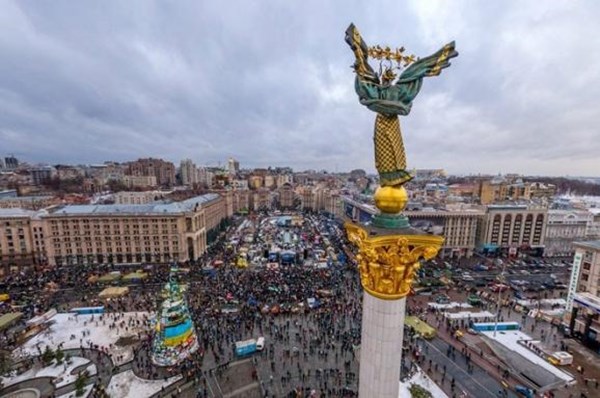 The organizers of the ''Blockade of the Donbas' whose members are blocking the railroad in Luhansk region are initiating a "public discussion" of the situation at the Independence Square in Kyiv. This was reported on February 12 at the headquarters of the Blockade.

According to the organizers, a “veche" or popular assembly should be held in the center of Kyiv on February 19 in response to the "intention of the authorities to hold a meeting of the National Security and Defense Council."

The statement released by the organizers says, "We will also initiate the discussion, but... with the people of Ukraine. The Headquarters of the Blockade are initiating public discussion of the blockade during a veche at the Independence Square, which is initiated by the OUN Movement [Organization of Ukrainian Nationalists]," the statement says.

On February 12, the head of the Donetsk Regional Military-Civilian Administration, Pavlo Zhebrivskyi, held a meeting with the coordinators of the blockade of the railway and with the People's Deputies participating in the blockade.

"I invited to Kramatorsk the coordinators of the blocking of the railway and deputies Semen Semenchenko and Taras Pastuh. Volodymyr Parasyuk also came. They voiced their position regarding the blockade. I told them about the real political and economic situation in the region and about the possible consequences. I said that we must remember that the front-line areas are located here and that the organization of any mass action must be approached very, very carefully," Zhebrivskyi said.

On December 16, members of volunteer battalions declared that if all Ukrainian prisoners of war are not released by separatists within seven days, volunteers would start a total blockade of the separatist-held territories.

On December 26 the volunteers announced the blockade. Former Acting Chief of Staff of the Battalion, Aidar Valentin Liholit, promised to deny entry to any metal, coal, and timber, as well as industrial scale deliveries of alcohol and cigarettes.

One of the organizers of the blockade is Anatoly Vinorogodskyi. People's Deputies are also participating in the blockade, namely Semen Semenchenko, Volodymyr Parasyuk and Taras Pastuh.

NSDC Secretary Oleksandr Turchynov said that the decision of a group of volunteers to block territories in Donetsk and Luhansk regions that are beyond the control of the authorities of Ukraine is the exclusive right of the President.

On January 25, in protest against the trade with the separatists, protesters blocked the railway in Luhansk region between Svetlanovе and Shypylove, causing police to open criminal proceedings under Paragraph 1 of Article 279 of the Criminal Code.

On January 28, "the Headquarters of the Blockade" said they intend to expand the campaign, and declared the blockade of the Yasynuvata-Konstantynivka railway on February 10.