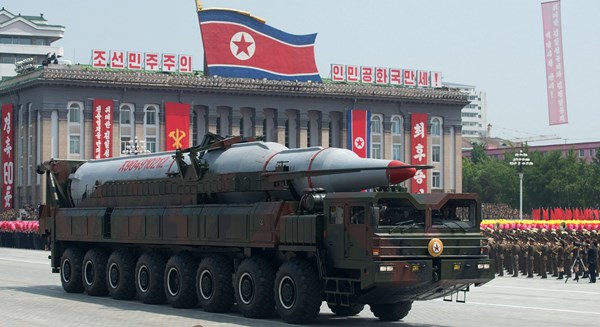 The US Navy nuclear-powered USS Carl Vinson aircraft carrier and its strike group approached the Korean Peninsula in anticipation of a possible new nuclear test or launch of ballistic missiles in North Korea.

According to the American private intelligence and analysis company Stratfor, the carrier group is currently located west of the Japanese island of Kyushu and is crossing the Korean Strait to the waters of the Sea of Japan toward the east coast of North Korea. There, according to Japanese media, citing sources in the country's Self-Defense Forces, Japanese warships will also join them.
In addition to the aircraft carrier USS Carl Vinson, the carrier group includes the missile cruiser USS Lake Champlain and two destroyers, the USS Michael Murphy and the USS Wayne E. Meyer. The group is accompanied by nuclear submarines equipped with Tomahawk cruise missiles as well.

According to CNN, in the event of a nuclear test, B-52, B-1B, and B-2 strategic bombers of the US Air Force, which are at the US airbase on the island of Guam in the western part of the Pacific Ocean, can also be involved in a possible strike against North Korea. In addition, ground and ship missile defense systems of the United States, Japan and South Korea can be used to intercept North Korean missiles. This includes the American ships of the USS Carl Vinson carrier group, which are equipped with the Aegis Missile Defense System.

The American carrier strike group left for the Korean Peninsula on Saturday. This is in response to the increasing number of ballistic missile launches conducted by North Korea. In addition, South Korea and Japan claim that Pyongyang is preparing another provocation by April 15, the 105th anniversary of the birth of the country's founder, Kim Il Sung, or April 25, the 85th anniversary of the founding of the Korean People's Army. This time it could be a nuclear test.

The US is ready to strike a preemptive blow against North Korea in the event that evidence is received of Pyongyang's preparations for a new nuclear test, NBC News reported on Thursday, citing sources in US intelligence.

Earlier, North Korean authorities called on foreign journalists in the country to prepare for a “big and important event” that will happen in the coming days.

The website 38north.org, of the US-Korea Institute at Johns Hopkins University, reports that the latest satellite images indicate that North Korea has completed preparations for a possible new nuclear test.
"Commercial satellite imagery of North Korea’s Punggye-ri Nuclear Test Site from April 12 shows continued activity around the North Portal, new activity in the Main Administrative Area, and a few personnel around the site’s Command Center," the article on the web site says.

US experts also claim that North Korea may be planning a sixth nuclear test. In February, Pyongyang launched ballistic missiles in the direction of the Sea of Japan, which Washington and Tokyo strongly condemned. President of the United States Donald Trump said that he would not allow North Korea to build missiles capable of reaching US territory and is ready to take care of the problem without outside assistance.

Pyongyang, in turn, says it is ready for a war, which, in North Korea's opinion, Washington is seeking to start.