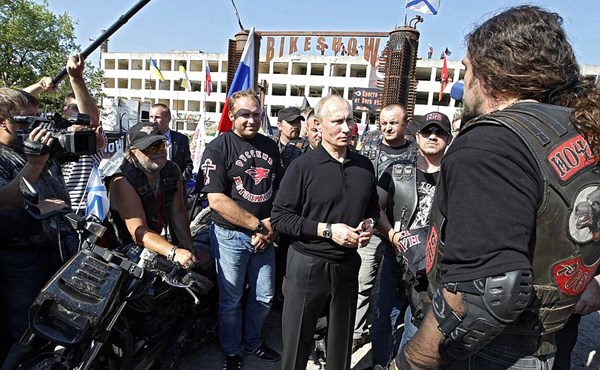 On the eve of the anniversary of the Warsaw Pact troops’ incursion into the territory of then Czechoslovakia, a group of the Kremlin’s propagandists from the biker club Night Wolves established a military camp near the capital of Slovakia, reported Radio Svoboda.

Their camp is located sixty kilometers away from Bratislava in the Dolná Krupá village, not far from the border crossings of Slovakia, Austria and the Czech Republic. The camp is a big area enclosed with high fences with several buildings painted in army camouflage uniform colors. There are also hangars and an area where military and police equipment are deployed.

The footage of the camp was taken by a drone and published on Twitter. According to the local media, the camp was established last month. It is headed by Jozef Hambálek who, according to journalists, owns the property. Hambálek did not publicly comment on the base’s operations but he stated earlier that he wanted to open a museum of military and police equipment.

The Ministry of Foreign Affairs of Slovakia expressed concern that “the activities of the group members should be closely monitored and evaluated."

Alexander “Surgeon” Zaldostanov is one of the Night Wolves’ leaders and is a known friend of the President of the Russian Federation, Vladimir Putin. The Night Wolves supported the annexation of the Crimea and support the DPR and LPR separatists in the conflict in the Donbas.

The motor club received $51 thousand from the Russian government for a “motorcycle pilgrimage” in 2016 but received no Presidential grant last year for the development of its activities.