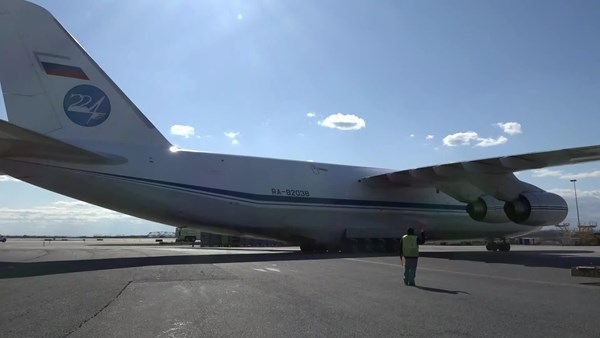 Washington received a bill from Moscow for medical and protective equipment delivered by Russia in April as "humanitarian aid." The U.S. must pay about $660,000, reports the Russian service of BBC.

Earlier, the Kremlin claimed that it was a solely "humanitarian assistance," and Donald Trump publicly welcomed the Russian initiative: "It was a very nice gesture on behalf of President Putin and I could have said 'no, thank you' or I could have said 'thank you.' And it was a large plane of very high-quality medical supplies. And I said, 'I'll take it.”.

However, the day after the delivery it became known that the U.S. will pay for half of the cargo delivered by the transport aircraft An-124 "Ruslan" of the Russian Armed Forces. Later it turned out that most of the "gifted" aid turned out to be useless.

According to the cargo description compiled by the Federal Emergency Management Agency (FEMA), Ruslan delivered to the United States 4,000 industrial m-95 full-face gas masks, 15,000 respirators, 80,000 packages of antiseptic, 400,000 different medical clothing items, including protective overalls, and 30,000 gloves. Among them were both surgical and rubber, used in everyday life by housewives. In addition, 45 Venta-M ventilation devices were delivered to the United States.

"As far as I know, there were problems with the ventilation devices, as they are designed for a voltage of 220 volts, and the networks in the U.S. use a voltage of 110 volts," the representative of the agency said. He also said that gas masks sent by the Russia "meet the requirements of the military" but are not used for medical purposes.

Many political observers in the United States regarded the delivery of "humanitarian cargo" as another "propaganda stunt" of the Kremlin. In particular, the former commander of U.S. forces in Europe, General Ben Hodges, wrote on Twitter that the cargo delivered is "not a gift from the Kremlin, but a gift to the Kremlin." I addition, at least two Russian companies involved in the delivery were on the U.S. sanctions list.